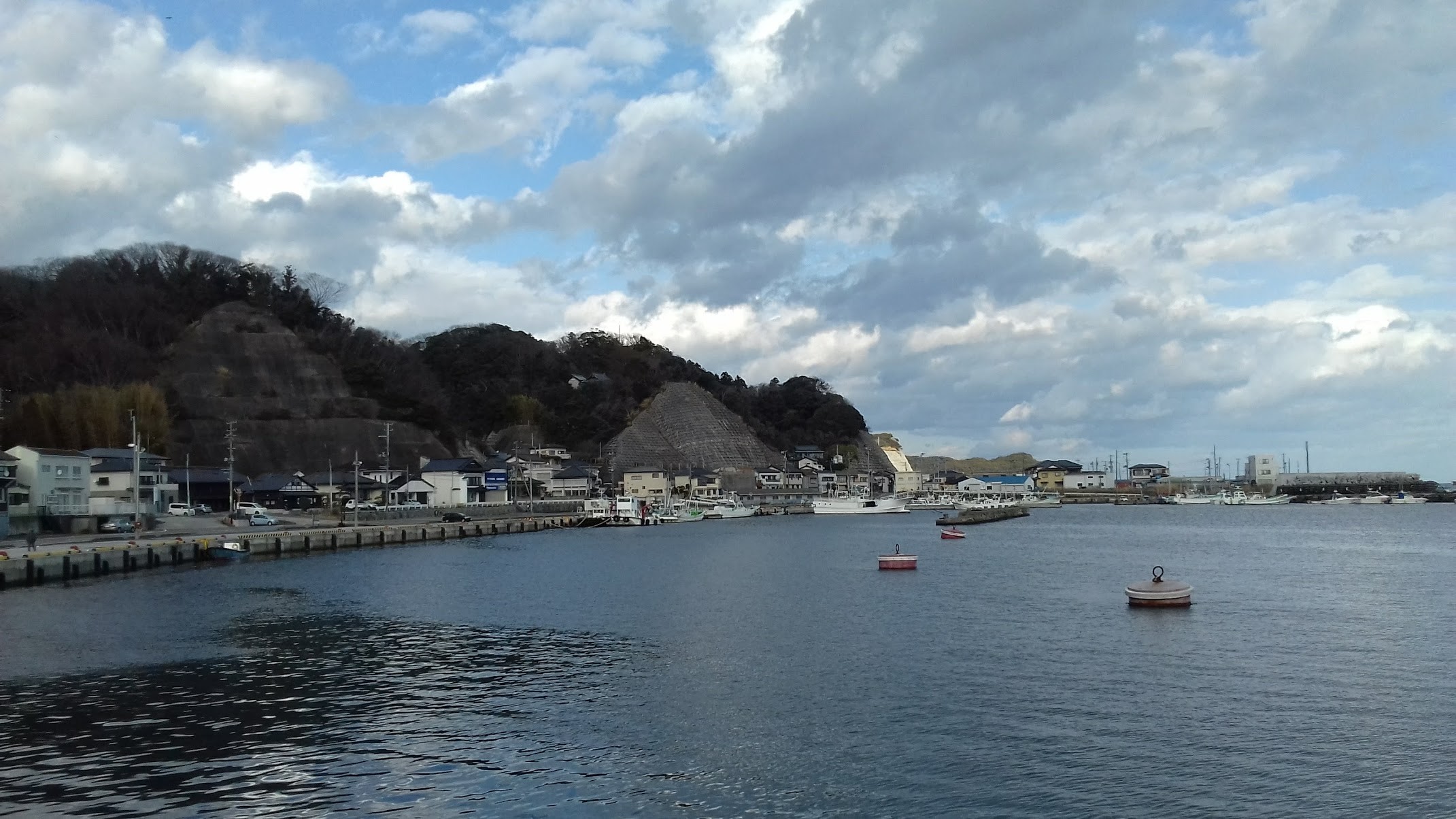 I have been visiting the coastal area of Fukushima Prefecture regularly since 2014, to research the revitalisation of fisheries and coastal communities following the 2011 triple disaster. During my fieldwork in 2019, I got to know the Real Fukushima Tour team and was very impressed with their ongoing efforts to facilitate understanding of the current situation in Fukushima. Indeed, it was while on their tour that, from the top of a hill in Okuma Town, I first saw the storage tanks for treated water stretching out around the Fukushima Dai’ichi nuclear plant and realised the scale and extent of the challenge to be resolved. With that in mind, whilst not directly related to the tour, on the 10th anniversary of the 2011 disasters I would like to share some wider insights from my research into how the revitalisation of fisheries and fishing communities has progressed, and what the question are that still lie ahead.

As well has having a serious effect on land, the Fukushima Dai’ichi nuclear accident also had major implications for Fukushima’s seas. Scientists estimate that 70-80% of the radioactive material released from Fukushima Dai’ichi ended up in the north-west Pacific Ocean [🔗Sciense]. Immediately after the accident, fisheries in Fukushima were voluntary suspended due to the radiation situation and infrastructural damage caused by the earthquake and tsunami. But what has happened since, and what is the status of Fukushima fisheries ten years on from the events of 2011?

In 2021, fishing boats are once again operating out of each and every one of the small inshore fishing ports on the Fukushima coast. Fukushima fish is back on the menu in local bars and restaurants, and seafood caught in Fukushima waters is on sale in fishmongers and supermarkets. If we think back to the situation in the days immediately following the disaster in March 2011, then this looks like a remarkable recovery. The fact that so many fish are now back on the menu and so many ports are open again is testimony to the hard work and cooperation of many people, from scientists to local government officials to fisheries cooperative managers, and of course the fishers themselves.

Soon after the nuclear accident, Fukushima Prefectural Government began sampling fish, seawater and seafloor sediment to monitor radioactivity, supported with data collected by Japanese government agencies and by Fukushima Dai’ichi operator Tokyo Electric Power Company. In spring 2012, trial fishing operations resumed in Fukushima out of a small number of fishing ports and on a limited number of fish species in which radioactive caesium had not been detected during monitoring operations. Fish landed in trial operations can be sold to brokers, and then on to the public, after being screened for radioactive caesium in labs at the quayside. You can even go online and view the screening data, which is updated two or three times weekly after each trial fishing activity [🔗Trial Fishing]. Produce landed in Fukushima ports is screened to a standard of 50 Becquerels of radioactive caesium per kilogram (with additional screening for more than 25 becquerels per kilogram), compared to a standard of 1,250 Becquerels per kilogram in the European Union. What these numbers mean is that the screening process for Fukushima seafood is much stricter, and much more transparent, than for many other parts of the world.

Since 2012, these trial fisheries have continued to expand as knowledge of marine radioactivity increases, more and more species are released for consumption, and port and coastal infrastructure is rehabilitated.  However, trials have been limited to less than 20% of the pre-disaster capacity of coastal fisheries in Fukushima. With that in mind, the Soma-Futaba Fisheries Cooperative – which operates in the waters in the north of Fukushima Prefecture – will switch to ‘expanded operations’ from April 2021, with a vision to expand at least some types of fishing activity in Soma to around 60% of the capacity they were operating at before 2011.

The benefits to rehabilitating fisheries are not purely economic, though. In autumn 2019, my colleagues and I ran a workshop with fishers in Haragama Fishing Port in Soma, to find out how fishers felt the revitalisation of fisheries was going and what their remaining concerns were. One of the key messages we heard was that the fishers continue to be extremely proud of their work. We were told that being back out on the water not only contributes to a sense of pride and identity for the Soma fishers by allowing them to continue doing ‘their’ work, but also affords the fishers a chance to interact with their peers and colleagues, helping to support wellbeing and maintain good relations with each other. Residents in coastal communities were similarly pleased to be able to eat locally-landed fish again, and saw the return of local seafood as symbolising the wider recovery of the area [🔗ScienceDirect].

However, the recovery of Fukushima’s fisheries is far from complete – and there may be more challenges on the horizon. Since the triple meltdowns happened, it has been necessary to run water through the damaged reactors at the Fukushima Dai’ichi site to keep them cool. Although this water can be treated to remove many of the more harmful substances, not all of the radioactive material can be removed with the existing technologies on-site. The main substance left in this treated water is tritium, although marine radioactivity expert Ken Buesseler from Woods Hole Oceanographic Institute in the USA explains that there may be other substances in the tanks too and that a full survey of what is in each of the tanks is necessary before deciding what to do next [🔗Science] The preferred solution until now has been to store this water – along with recovered water from the ground beneath the plant – in tanks on-site. However, TEPCO claims they will run out of space to store the treated water by 2022, and on the basis of expert committee advice the Japanese Government has indicated it is going to approve a plan to release some of this treated water into the Pacific Ocean.

There is good scientific consensus that as long as the monitoring and screening protocols in place so far are maintained, then releasing treated water into the sea off Fukushima will pose very little risk to humans[🔗Headlines]. Nonetheless, the fisheries cooperatives in Fukushima are strongly opposed to any releases of treated water, on the grounds that it will undo a decade’s work of work to communicate the safety and quality of Fukushima seafood to consumers and the public. As of March 2021, no final decision on when or how the treated water releases will happen has been made.

The last ten years have made clear that fishing is not only an economic activity for the Fukushima coast, but also a socially and culturally meaningful practice that is a source of pride for fishers and coastal residents alike. As such, the revitalisation of coastal fisheries is not only about re-starting the economy of Fukushima’s fishing ports, but also about restoring a sense of identify and belonging for coastal communities in Fukushima. Whilst there are no easy answers to the question of what to do with the treated water stored on-site at Fukushima Dai’ichi, it is crucial that the decision-making process and the final outcome takes into account the significance of healthy and vibrant fisheries to local communities.

Dr Leslie Mabon is a Senior Lecturer in Social Science at the Scottish Association for Marine Science-University of the Highlands and Islands; and a Future Earth Coasts Fellow. His current research on the Fukushima coast is supported by a Scottish Government-Royal Society of Edinburgh Scotland-Asia Partnerships in Higher Education Grant. You can read more about his research at resilientcoastal.zone, and follow him on Twitter @ljmabon. Email leslie.mabon@sams.ac.uk or ljmabon@mac.com to request copies of any of his scientific papers or to ask any questions you might have!